(Depending on Lunar date of your country).

She was a wealthy woman and big trader of the Arab but she devoted her entire riches to the cause of Islam and the Holy Prophet (SAW). She faced every difficulty with forbearance for the sake of Allah and His Prophet (SAW).

Bibi Khadija-tul-Kubra (RA) was a person who devoted herself to worship and remained consistent in the face of difficult times despite being rich. She embraced Islam at a time when no other person was ready to do so.

Bibi Khadija-tul-Kubra (RA) gave unflinching support and encouragement to the Holy Prophet (SAW) when people would create difficulties for him. She possessed excellence character and was known as Tahira for her piety. She said that if we wanted to put our lives on the path of piety and good works, we would have to receive light from the life of Hazrat Khadija-tul-Kubra (RA) because her life is an ideal for our guidance.

Bibi Khadija-tul-Kubra (RA) was an honest, brave and generous woman who stood by the Prophet of Islam (SAW) through thick and thin. It is the privilege and honour of Bibi Khadija-tul-Kubra (RA) that she gave birth to the Prophet’s daughter Bibi Fatima (RA). After her death, the tears would come to the eyes of the Holy Prophet (SAW) whenever her name was mentioned. The Holy Prophet (SAW) would remember her services for the cause of Islam and pay her tribute.
.

As long as Bibi Khadija-tul-Kubra (RA) lived, the Holy Prophet (SAW) did not contract second marriage in her presence

The words the Holy Prophet (SAW) expressed to describe her exemplary sacrifices represent his love for her. He (SAW) said: “By God, Khadija believed in me at a time when people rejected me. Khadija gave me place when people refused to accommodate me with them and Khadija (RA) gave me children.”

If you, or your loved one’s are intending to come to Ajmer Sharif for Ziarat (Pilgrimage) then please contact us on the details below, so we can assist you in every way we can, to make your Pilgrimage swift, peaceful, effective, blessed & prosperous!
If you would like to take part by making an offering for Fathia, Nazar-o-Niaz, Qurbani,or Gyarmee , Chattie fathia sharif or you would like to take part in Urs of Wali-Allah’s (All Sufi Saint’s from all Silsila’s); you can send your heartily offerings & donations direct to us safely now! or in the future.

Also in the Mosque inside Darbar Sharif we can arrange for Dua-e-karima, khatam-e- khwajgan, Dua-e-Shifa, Ayate karima and similar dua’s on your behalf . We can arrange for food to be made in Big deg & Small deg at Darbar .

We can also arrange on your behalf flowers for Mazar Sharif and chadder (Shrowd) for Mazar Sharif or present Sandal wood in Mazar Sharif. Also we can arrange for lungar (Feeding) the poor people. Also arrangements can be made for Haqiqa and Bismillah Sharif. The Ajmer Sharif dargah also organise marriages for poor people as well as Education “Taleem”. The Darbar Sharif arranges for all poor tourist in Ajmer sharif , lodging boarding, Transportation and food clothes for people. Also provided are tickets for railway & bus and other expenditure while at Darbar Sharif.

You can send hour heartily offerings & donations direct to us safely via Western Union or Money Gram money Transfer. now! or in the future, 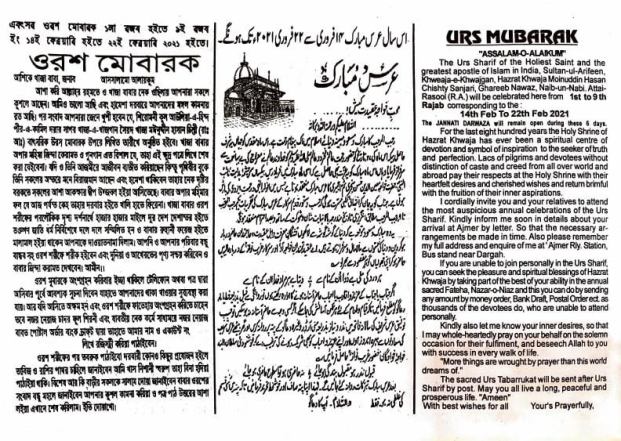