Abū Ḥanīfah was born in the city of Kufa in Iraq,during the reign of the Umayyadcaliph Abd al-Malik ibn Marwan. His father, Thabit bin Zuta, a trader from Kabul, Afghanistan, was 40 years old at the time of Abū Ḥanīfah’s birth.

His ancestry is generally accepted as being of Persian origin as suggested by the etymology of the names of his grandfather (Zuta) and great-grandfather (Mah). The historian Al-Khatib al-Baghdadi records a statement from Imām Abū Ḥanīfah’s grandson, Ismail bin Hammad, who gave Abū Ḥanīfah’s lineage as Thabit bin Numan bin Marzban and claiming to be of Persian origin.The discrepancy in the names, as given by Ismail of Abū Ḥanīfah’s grandfather and great-grandfather, are thought to be due to Zuta’s adoption of the Arabic name (Numan) upon his acceptance of Islam and that Mah and Marzban were titles or official designations in Persia, with the latter, meaning a margrave, referring to the noble ancestry of Abū Ḥanīfah’s family as the Sasanian Marzbans (equivalent of margraves) of Kabul (Modern day Afghanistan). Those stories maintain for his ancestors having been slaves purchased by some Arab benefactor are, therefore, untenable and seemingly fabricated. There is a discussion[] on being of Turkic or Persian origin.But the widely accepted opinion, however, is that most probably he was of Persian ancestry from Kabul. 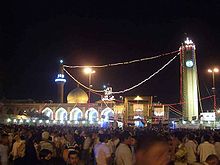 In his reply to al-Mansur, Abū Ḥanīfah said that he was not fit for the post. Al-Mansur, who had his own ideas and reasons for offering the post, lost his temper and accused Abū Ḥanīfah of lying.

“If I am lying,” Abū Ḥanīfah said, “then my statement is doubly correct. How can you appoint a liar to the exalted post of a Chief Qadi (Judge)?”

Incensed by this reply, the ruler had Abū Ḥanīfah arrested, locked in prison and tortured. He was never fed nor cared for.Even there, the jurist continued to teach those who were permitted to come to him.

In 767, Abū Ḥanīfah died in prison. The cause of his death is not clear, as some say that Abū Ḥanīfah issued a legal opinion for bearing arms against Al-Mansur, and the latter had him poisoned. It was said that so many people attended his funeral that the funeral service was repeated six times for more than 50,000 people who had amassed before he was actually buried. On the authority of the historian al-Khatib, it can be said that for full twenty days people went on performing funeral prayer for him. Later, after many years, the Abū Ḥanīfah Mosque was built in the Adhamiyah neighbourhood of Baghdad.